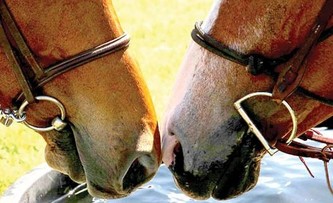 The number of horses that have tested positive for equine herpesvirus-1 (EHV-1) at Sunland Park racetrack, in New Mexico, continues to rise, while officials in Arizona report that one horse euthanized after developing neurologic signs was confirmed positive for the virus.In a Jan. 30 update, the New Mexico Livestock Board reported that 28 horses have now tested positive for EHV-1 on nasal swab and/or whole blood testing.

“These horses are from 17 different barns within Sunland Park racetrack; at present, horses in surrounding areas have tested negative,” the board’s statement said. “Of these 28, four horses have been euthanized for progressive neurologic signs. No movement of horses is being allowed in or out of Sunland Park.”

Meanwhile, official in Arizona also released an update on Jan. 30 via the Equine Disease Communication Center on the potential EHV-1 cases at Turf Paradise racetrack.

​“Three horses came out of Sunland in New Mexico prior to a quarantine being initiated on the track,” the statement said.“These three horses had limited exposure to other horses prior to being moved into an isolation pen. Subsequently one horse did develop clinical neurologic signs and was put down. A necropsy was performed at University of Arizona Veterinary Diagnostic Lab and samples submitted for testing.”

That horse tested positive for the neurologic form of EHV-1, the statement said “Currently the track is under quarantine and will continue with racing yet no horses are allowed on or off the track other than those currently there. As of (Jan. 30), there are no new cases and the other two horses in isolation are not showing any signs of disease.”

Herpesvirus is highly contagious among horses and can cause a variety of ailments in equids, including rhinopneumonitis (a respiratory disease usually found in young horses), abortion in broodmares, and myeloencephalopathy (the neurologic form). In many horses, fever is the only sign of EHV-1 infection, which can go undetected.
​
In addition to fever, other common signs of EHV-1 infection in young horses include cough, decreased appetite, depression, and a nasal discharge. Pregnant mares typically show no signs of infection before they abort, and abortions usually occur late in gestation (around eight months), but can be earlier. Abortions can occur anywhere from two weeks to several months following infection with EHV-1.

Horses with the neurologic form usually have a fever at the onset of the disease and might show signs of a respiratory infection. A few days later, neurologic signs such as ataxia (incoordination), weakness or paralysis of the fore- and hind limbs, urine retention and dribbling, loss of tail tone, and recumbency (inability to rise) develop.