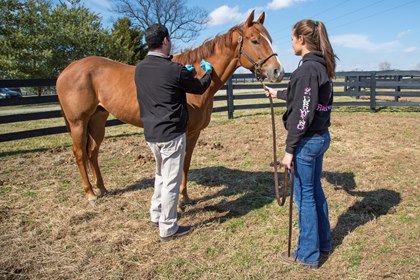 West Nile virus is on the rise in Colorado horses this year.  According to Colorado’s  Department of Agriculture there have been twelve confirmed cases this year, four of which are in Adams and Weld counties. With this dangerous and sometimes deadly virus on the rise, it is important for horse owners to be aware of the signs of the disease and how to prevent it from happening.
West Nile is a virus that is spread by mosquito bites. Horses, humans and birds are the species most at risk for contracting this virus. If a horse becomes infected they can exhibit signs such as, stumbling, lack of coordination, fever, and partial paralysis. These symptoms are similar to those of other disease’s horses can get, such as, encephalitis, rabies, and equine herpes virus.  It is important to contact a veterinarian right away if any of these symptoms are observed.
Prevention is the most important way to fight West Nile. The West Nile vaccine should be incorporated into every horse’s yearly vaccination protocol. If a horse has been previously vaccinated for West Nile they will need a yearly booster. If a horse has never had this vaccine, that animal will need a two-shot series, spread three to four weeks apart. The West Nile vaccine can be given individually or in a combo shot. While vaccines are highly important for prevention owners should also take steps to reduce mosquitoes on their property. Standing water should be eliminated to reduce breeding grounds. Horses should also be kept inside in the evenings and mornings when mosquitoes are most active, and mosquito repellent should be used. Owners should also frequently clean water troughs and turn lights off at night that attract the insects.
In the event that a horse does contract the virus, many can recover with support care, though some cases may result in death. Vaccination and keeping a clean facility are important weapons in fighting against West Nile Virus. Since West Nile can be contracted by both humans and horses, prevention is key. A veterinarian should be contacted immediately if a horse shows any neurological or abnormal behavior. For more information regarding West Nile visit http://www.fightthebitecolorado.com/horses.htm or for current updates on confirmed West Nile cases in the area visit https://www.colorado.gov/pacific/agmain .