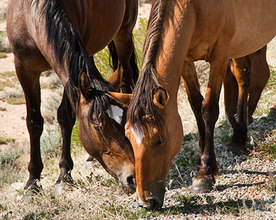 ​Overpopulation of wild horses and burros has been a major focus for the Department of the Interior’s Bureau of Land Management as grazing land begins to deteriorate because of enduring droughts and animal health becomes increasingly at risk.

The BLM announced July 7 that it is overseeing 21 research projects for its Wild Horse and Burro Program designed to identify ways to maintain populations at manageable levels, decreasing the need to remove herds from publicly owned land.

Paul Griffin, PhD, research coordinator for the program, said at the National Wild Horse and Burro Advisory Board meeting Sept. 3 that the new research will focus heavily on contraception, ecology, and population modeling.
​
According to the BLM, wild horses and burros essentially have no natural predators in these areas, and current adoption rates are decreasing steadily each year. With the dropping rates and minimal to no interventions, the herd population is expected to double every four years.

“It’s at crisis stage,” said Dr. Sue McDonnell, a member of the advisory board representing research and an adjunct professor of equine reproductive behavior at the University of Pennsylvania, in an interview with JAVMA.
“One of the big problems at BLM is that most of their money has to be spent on looking after those horses that are off the range and in holding.”  In collaboration with scientists from the U.S. Geological Survey and prospective university collaborators, the BLM will work on tools to create safe on-range management techniques and lessen time in corrals or on off-range pastures. These projects, BLM announced, will receive approximately $11 million of funding over a five-year period.

This year, the BLM’s maximum appropriate management level—the number of wild horses and burros that can thrive in balance with other public land resources—for public lands in 10 Western states has been estimated to be about 27,000 animals. The actual number of animals present as of March 1 was almost 59,000.

Some projects that the BLM will conduct are socioeconomic surveys for communities in or near the equine populations to address any public concerns for the animals and the demand for adoption or purchase of wild horses. Dr. Griffin said eight projects are also being done with various universities for potential development of new or improved sterilization methods, mostly for mares. Only four proposals so far—one each from the University of Kentucky and Louisiana State University and two from Colorado State University—have been finalized and funded.

The USGS has both ongoing projects and proposals for future studies, Dr. Griffin explained at the advisory board meeting. These studies include topics such as fecal DNA analysis, trials of porcine zona pellucida contraceptive vaccines, collar and radio marking, aerial surveying, herd management area demography for horses and burros, population model testing, and even potential use of silicone rubber intrauterine devices in mares.

The ultimate goal is to lower the population to match the carrying capacity of the land, and Dr. McDonnell said the best way to do this is to control fertility. “Most of the research has to do with developing effective and humane methods for population growth suppression,” Dr. McDonnell said, “(for example), spaying mares and other ways to permanently render an animal unable to reproduce. The main tool that (the BLM) has are porcine zona pellucida vaccines.” The PZP vaccines come in two forms, which have durations of one to two years. “The current problem with that is they need to get more than one application for it to be effective,” Dr. McDonnell said. “It’s a huge expense, and the welfare of the animal is a public concern every time those animals are gathered up.”

One university-led study that has not yet been funded would work toward upgrading PZP, Dr. Griffin said. “(This study aims to) deliver PZP in a different kind of time-release vehicle that hopefully could last several years,” he said.

But even longer-lasting PZP vaccines can only do so much given the extreme population growth that has been seen recently. According to reports by the BLM, for example, in the past year alone there was an increase of 9,000 animals, but only 384 animals were vaccinated through hand injection or darting.

Given current difficulties in population suppression, the BLM is aiming over the next five years to bring forth multifaceted methods for population control and set national standards for proper treatment of the ecosystems under the agency’s control. “We are also interested in habitat use effects,” Dr. Griffin said. “We would like to continue improving the inventory methods, and we also want to improve our understanding of the perceptions of the public at large about the program and about wild horses and burros.”

For more information on the 21 research projects overseen by the Bureau of Land Management’s Wild Horse and Burro Program, visit http://jav.ma/1XKYwYn.​